Benghazi, Petraeus, and the CIA

Two years after the failed NATO intervention, Libyan society is in chaos. Over 50,000 were killed in a mission that was meant to protect civilians, and there are reportedly more than 1,700 competing militias marauding the streets. One outcome of this chaos was the attack on U.S. mission in Benghazi which led to the death of U.S. Ambassador J. Christopher Stevens on September 11, 2012. There have been Congressional hearings on this attack, and on May 8, U.S. Representative Darrell Issa, the California Republican who heads the House Oversight and Government Reform Committee, called another inquiry into the September 11, 2012 event. At this inquiry, Greg Hicks, the deputy chief of mission in Libya who became the top U.S. diplomat in the country after Ambassador Chris Stevens was killed, testified that the U.S. government did not do enough to intervene to rescue Ambassador Stevens.

What Greg Hicks and Representative Darrell Issa did not probe was the role of the CIA and Petraeus in the use of Benghazi as the largest CIA station in North Africa, where they ran militias into Syria. When the information about the attack on the US ‘facility’ in Benghazi was first brought to light, there was confusion because this information had the potential of putting the vaunted military in its proper perspective. Was the space that was attacked a consulate, a State Department facility, a CIA safe house, or indeed a prison for captured militias? This confusion took attention away from the reality that elements in the military/intelligence hierarchy had formulated a policy to align with certain militia groups in Eastern Libya and that these militias (sometimes called jihadists) had in the past been linked to groups that the U.S. called ‘terrorist organizations.’ France, the CIA, and the U.S. Africa Command had aligned with these jihadists to destabilize Libya, freeze billions of dollars of assets, execute Gaddafi, and use Libya as a rear base in the drive for regime change in Syria.

The Republicans had sought to benefit from the confusion and disinformation that had been spun by the intelligence and the military about the real causes of the death of the Ambassador in Benghazi. The hearings called before the Republican-controlled Congress did reveal that the private military 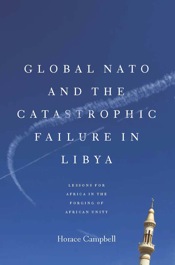 establishments had a prime place in the protection of U.S. legations around the world. But these hearings did not come close to the real questions that should be posed to David Petraeus: what role did the use of Benghazi as a CIA station for the training of Jihadists play in the attack?

Now that the conservative media is calling the revelations of the CIA revision of the ‘talking points’ a cover up, it may be instructive to obtain a clearer picture of the role of Petraeus and the CIA in Benghazi. Why did Petraeus travel to Benghazi? What was the nature of his report? These questions have not been properly addressed and although the Accountability and Review Board, which was headed by Thomas Pickering with retired Adm. Mike Mullen, the former chairman of the Joint Chiefs of Staff, did issue a scathing report about the absence of leadership, the issues of Petraeus and the Jihadists have been buried in the hearings.

Pickering and Mullen’s scathing report released in December found that “systematic failures and leadership and management deficiencies at senior levels” of the State Department meant that security was “inadequate for Benghazi and grossly inadequate to deal with the attack that took place.”

What this review and these hearings are obfuscating are the real issues that emanate from the role of the CIA in recruiting Jihadists in Benghazi. On Monday at a press conference, Obama called the continued discussions on Benghazi a “side show.” However, for the millions of persons in North Africa that have been negatively affected by the NATO intervention and the role of the CIA, private
militias and private military contractors, the debates in the USA can be viewed as another diversion to cover up the CIA operations in North Africa. Ethan Chorin, one of the operators in Libya and close ally of Ambassador Stevens, has weighed in with an op-ed piece in the New York Times that stated,

“The biggest American failure wasn’t in the tactical mistakes about security at the diplomatic mission where Ambassador J. Christopher Stevens and three other Americans died. It lay in thinking that an intervention in Libya would be easier or less costly than it has proved to be — a judgment that led the United States to think it could go in light, get out fast and focus on the capital, Tripoli, without paying enough attention to Libya’s eastern provinces, where the rebellion began as a call for a constitution and increased civil liberties.”

Chorin, who was an insider in Benghazi, continues to insist that the NATO intervention was “inspired and skillfully executed, and had the potential to do more good than harm.”

In my book, Global NATO and the Catastrophic Failure in Libya, I have challenged this verdict that the intervention did more good than harm. Some other supporters of the Libya intervention are now calculating the costs as embassies rush to leave the people to the mercy of the militias.  According to the British newspaper the Guardian, “the fear of further violence has led to the British and US embassies withdrawing some staff, the European Union closing its mission in Tripoli and BP announcing it was pulling out non-essential staff.” France had already scaled back its operations after a military attack on its mission in Tripoli. What Daryl Issa and the forces calling the issues of Benghazi a cover-up are refusing to deal with is the deceptions and lies that led to the catastrophic situation in Libya and North Africa today.

Horace Campbell teaches at Syracuse University in New York.  He is the author of Global NATO and the Catastrophic Failure in Libya, Monthly Review Press, 2013.

Horace Campbell is Professor of African American Studies and Political Science, Syracuse University. He is the author of Global NATO and the Catastrophic Failure in Libya, Monthly Review Press, 2013.  Notes.