The Pretense of Doing Good (While Raising Millions)

On Tuesday, Oscar-winning actor Sean Penn, whose new role is Haiti’s ambassador to the United Nations, extolled the progress in the island nation of almost 10 million people.

Penn has worked hard to improve the living standards of tens of thousands of people in one of the capital’s largest internally displaced persons (IDP) camp. However this recent statement is best read as an infomercial, selling president Michel Martelly – a.k.a. compas musician “Sweet Micky” – reading his lines of Haiti being “open for business,” a statement recently challenged by the U.N.

Penn’s performance distracts attention away from other grim realities, particularly for the almost 350,000 people still living under tents in Haiti, but he is far from the only actor playing make believe. Here’s a list of what might be considered Haiti’s Oscar-winning performances.

Goes to the United Nations. After over 20 months of vociferously denying powerful scientific epidemiological and genetic evidence arguing that UN troops brought a deadly strain of cholera to the country in October 2010, killing over 8,000, they finally admitted guilt but re-dressed the debate, recently arguing they are not responsible for damages.

They also receive the nomination for best humanitarian actor in a supporting role for this cover up, and best special effects for technicality claiming diplomatic immunity.

This show goes to former dictator Jean-Claude Duvalier, who took hundreds of millions in foreign aid which agencies like the IMF1 documented went into the secret police – tontons macoutes – which killed or ‘disappeared’ tens of thousands of Haitian people. Duvalier brazenly returned to Haiti in January 2011, probably to make a claim on the $5 million in aid frozen by the Swiss government. Since then he has been living large. Today, Thursday, February 28, he was finally on trial for the numerous abuses of human rights.

Tied between the international community, humanitarian agencies, and the Haitian government for supporting the climate of fear and violence for Haiti’s IDPs.

In a December report, Oxfam estimates that 233,000 people in 247 camps face forced eviction, a situation condemned by international human rights groups like Amnesty International and others. I have written here about residents at Hancho near the industrial park.

As funds for relocation have all but dried up, many IDPs who remain are in a constant state of fear. Near midnight on Saturday, February 16,  hundreds of people’s makeshift homes were burned to the ground in camp ACRA 2 in Petionville’s Juvenat near the Karibe Convention Center. According to Jackson Doliscar of FRAKKA, “This camp was always under threat. The more then 4,000 families said they don’t have anywhere to go. They sleep in the streets or the corridors between people’s houses. People fled this act of violence and returned to find that assailants continued to burn other tents.

“Ms. Dilia Mari had 5 children in her tent, including a one month baby named Cadet Ismaélla that she luckily saved. But according to witnesses there were three people burned, including a child. It’s important to point out that the camp was burned one and two days in advance of the CARICOM (Caribbean Common Market) assembly.”

Human rights groups confirmed that as of today no formal investigation has yet been made, and like with cholera, the victims haven’t received any word about compensation for damages.

Best Actor in a Lead Role

A mission group that has raised over three million dollars to build homes for people seeking emergency shelter in their compound. That said, the 537 families still in Grace Village, in the sprawling suburb of Carrefour, have been living in constant fear of eviction for the past year and a half.

While it is common practice for nonprofits to charge overhead, typically explained because funds for general operating expenses are scarce, the level of this markup can only be described as “non-profiteering,” especially in the light of a discrepancy in Grace International’s annual report to the IRS. While in their 2010 tax return they had noted “current year” revenues as $981,183, up from $311,157 the previous year. 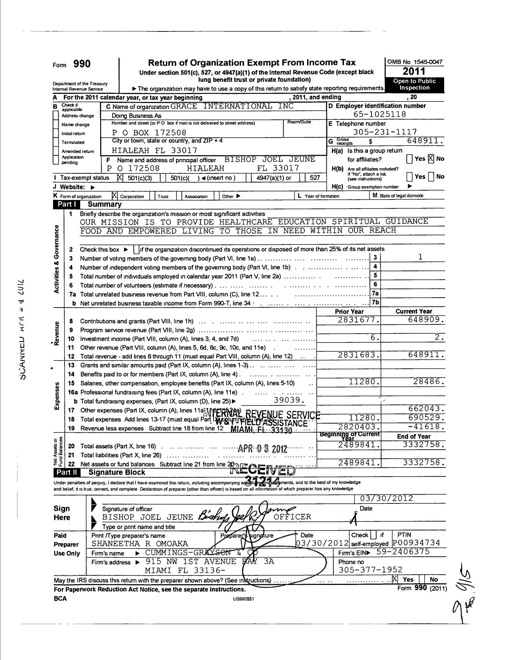 Either because of the exposé, the lack of progress – or a changing in the political landscape as President Martelly unilaterally renamed all but two of the country’s municipal governments – Grace Village increasingly responded with threats of violence.

Resident Leader Marcel Germain, who was interviewed in the documentary, documented an increase in violent tactics.

The following is a transcript of a testimony offered at an international colloquium on IDPs and aid held at the Faculté d’Ethnologie, hosted by the Development Sciences Department, to commemorate international human rights day, December 10-11, 2012. Marcel’s testimony was cut short – certainly before the q and a period – because of tear gas police fired in the university building in their attempt to quell an unrelated student protest. (The previous international colloquium held there last February had also been teargassed).

Every day is a dilemma where Joel Jeune beats people up, forces them out, threatens people, everything. What’s worse, three people inside have lost their lives. One person we call “TiFrè” (little brother). During a Brazil-Ecuador football game, there was a discussion. [Grace Village’s chauffeur] took an electric stick they had inside and he hit TiFrè with it in the heart.

The second person who died had bullets in his forearm, the same time. But his brother works as a security guard at Joel’s house. They corrupted him, promising that they’d give him medical care. They have a clinic, here. They said they’d give him a little money, a little rice. This guy didn’t have anything. So they had him stay. He didn’t go to the Justice. He didn’t do anything.

The third person they killed was Jean. They killed him on March 23. Jean had gone out and returned with a bucket full of wood beams and put it in front of his tent. Two children played with the bucket and he told them to stop, that the wood would injure you. He took a coconut leaf and brushed the children’s feet when he saw the kids insisted.

Someone called security and within minutes, three guys showed up. They took Jean outside and got into an argument. Outside the security agents were yelling at him. One said, “We’ll see if you avenge your child.” Livid, he took a pick out of his backpack and stabbed Jean three times.

Jean fell down right there, in front of the gate. And he died there.

I came inside to investigate. I had them call the Justice of the Peace, who came with police backup to complete the investigation.

Residents’ hopes were dashed when the pastor’s political influence blocked any legal action. In retaliation Grace Village locked people inside, refusing to let people leave until a legal injunction was filed on behalf of residents.

On Saturday, February 16, camp officials took out the front metal gate which provided a minimum of security. Taking out the gate exposes residents to “thieves, rapists, and anyone that Pastor Joel will send to enact violence against us at night,” according to resident testimony. As if to prove the point, someone threw rocks in the window later that evening.

Keeping up the pretense of doing good – raising millions – while promoting violence earns Grace International the Oscar for Best Actor.

Trying to get them to change their act, human rights groups BAI, DOP, and IJDH have filed a petition with the Inter-American Commission on Human Rights on behalf of Marcel Germain and other Grace Village residents requesting the Haitian government to stop this and other cases of forced eviction. Residents want the violence stop and to be relocated to safe and decent housing, which human rights groups say Haiti’s earthquake victims are entitled to under Haitian and international law.

Mark Schuller is Assistant Professor of Anthropology and NGO Leadership Development at Northern Illinois University and affiliate at the Faculté d’Ethnologie,l’Université d’État d’Haïti. Supported by the National Science Foundation and others, Schuller’s research on globalization, NGOs, gender, and disasters in Haiti has been published in twenty book chapters and peer-reviewed articles as well as public media. He is the author of Killing with Kindness: Haiti, International Aid, and NGOs (Rutgers, 2012) and co-editor of three volumes, including Tectonic Shifts: Haiti Since the Earthquake (Kumarian Press, 2012). He is co-director / co-producer of documentary Poto Mitan: Haitian Women, Pillars of the Global Economy (Documentary Educational Resources, 2009). He chairs the Society for Applied Anthropology’s Human Rights and Social Justice Committee, serves on several boards, and is active in many solidarity efforts.